Are You Getting Your Eyes Checked on Time?

Macular degeneration true story part two. The name has been changed for privacy purposes. By providing this, we hope that you will be much more aggressive about sun protection and your eyesight. 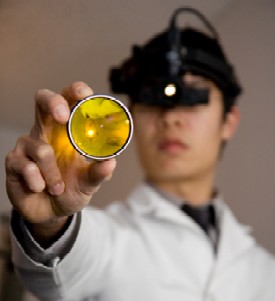 In the case of wet AMD, symptoms go from bad to worse quickly.

But in the case of dry AMD it can take years.

Overall, you need to take care of your eyes as best as possible.

One way would be for you to see your eye doctor at least once a year.


How could it happen again,

It was 2001 at the age of 66, when Mavis noticed that her right eye had something stinging or moving in it.

She had been thru this in 1988 with her left eye. She immediately called her ophthalmologist at the HMO, but was given an appointment for two to three weeks later.


She contacted her private ophthalmologist and was told to come in right away.

He diagnosed her as having a rare kind of Wet Macular Degeneration called ICNV(Idiopathic choroidal neovascularization).

Her right eye had leakage and underlying inflammation in the upper left corner of the eye, far away from the macula.

He insisted that it's an emergency and wrote a note to be given to the HMO people.

However by the time she was seen by the HMO ophthalmologist, a few weeks had gone by.

The worst was that the HMO laser specialist was on vacation and not expected back for two more weeks.

She was seen by other doctors, but they were of little help. There was no body to do the laser.

By the time the specialist saw her he said the leakage had got real bad and it was near her macula by then.

He said the laser may not help her now. So after all this he referred her to one his associates for a second opinion at the well known local university.

That's when she realized there is a whole array of specialists who practice in the field of Retina and Vitreous diseases and surgery.


The associate also mentioned to her that laser may not be beneficial at this time.

Mavis went on to see a third private practice doctor, upon which he practically yelled at her for waiting so long.

He said this eye should have been lasered months ago!

There was a better chance then by burning the blood vessels which had gone hay wire (idiopathic), thereby stopping further leakage and inflammation under the retina.

Because the inflammation had warped the retina and she was seeing things crooked at times.


Back with a Vengeance!


Not having much choice, she stayed with the University specialist and broke away from the HMO for good.

She was to be seen on a monthly basis.

Her eye seemed to get better at times and even the inflammation subsided.

But after a few months her right eye started bleeding real badly, where it flooded most of her right macula.

The doctor said it looks like a blimp under her retina and if he did hot laser it could flood the whole eye.

That's where he would inject this green colored liquid (Visuadyne©) to her arm, wait a certain number of seconds and then perform a cold laser.

Cold laser means, a light at a certain wavelength is aimed at the target. This light goes thru the retina without burning or hurting it.

However the liquid is sensitive to this light and thereby being in the blood vessels at that time, shuts down the vessels and stops the bleeding.

Basically the liquid gets activated by the cold laser light.

Vision loss can be emotionally devastating,

However after getting two treatments, the doctor observed that she may have got even worse and stopped the therapy.

Mavis lost her central vision in her right eye and uses her left eye now to see. There is still peripheral vision but that's very little help.

In Macular Degeneration, time is of the essence. Please see your ophthalmologist right away, if you suspect anything bothering your vision.

You only have two eyes. Make sure to get your eye exam every year, even if you don't feel anything is wrong and can read this notice with no problem.

Join in and share your experience or story. How?
Simply click here to go to Macular-Degeneration Stories and Experiences