Skin cancer awareness has certainly improved in recent years and yet the number of people suffering from melanoma has continued to increase at an alarming pace.

What's even more disturbing is the fact that there are nowadays thousands of cases involving children, and of course, children of all ages are vulnerable.

Alarmingly enough, the last twenty years has seen a 100% increase in the number of children developing malignant melanoma, and of course, this is the deadliest form of skin cancer.

You only need to look around you when you're out and about, and you'll soon start wondering if skin cancer awareness is even something parents think about, considering just how many infants and toddlers you see going about without any form of sun protection whatsoever. 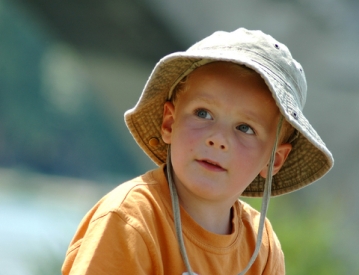 The most ironic thing of all is that the risk of a child developing melanoma can virtually be eliminated simply by making sure children wear hats to protect their heads and face from the sun.

Likewise, having a stroller facing away from the sun can mean the difference between life and death as far as babies and skin cancer are concerned.

Perhaps there should be more emphasis made regarding the fact that most damage caused by ultraviolet rays happens during the first eighteen years of a person's life.

Another alarming fact which many people remain oblivious to is that approximately two and a half million teenagers in the United States use tanning beds even though there is so much evidence linking the use of tanning beds to skin cancer.

In fact, if you use tanning beds, you have fifteen times more chance of developing skin cancer than what you would have if you simply tanned outdoors.

Perhaps the biggest culprit regarding the use of tanning beds is a lack of skin cancer awareness, but fortunately there are now several organizations and governmental departments who are trying to change the way people view tanning beds.

For example, several states in America have begun introducing legislation in order to try and limit the usage of tanning salons.

Amongst other things, such legislation would mean that those under the age of eighteen would need their parents' permission in order to enter a tanning salon.

Additionally, tanning salons would be required to display a comprehensive list of the potential health risks concerned. Even though this may seem like a drastic measure, it is something which will undoubtedly end up saving lives.

Moving on from children, we are also told that melanoma is now the second most common form of cancer affecting women between the ages of twenty and 29.

Of course, women in this age group are by no means children anymore, but then again, they are still somebody's children. This is something which all parents need to bear in mind if they have young kids.

For example, if you see your young child or teenager come home sporting a lovely bronze tan then you should seriously inquire as to how they got it.

Were they on the beach, or did they visit a tanning salon?

Perhaps they simply used some readily available tanning lotion, and if that's the case, then there's not really much to be concerned about.

Another strange twist in nature is that Asian children and African American children do not have the same risk as Caucasian children.

But unfortunately for them, if they do get melanoma it can often prove to be even more deadly simply because the color of their skin makes it more difficult to spot an irregular mole or skin lesions.

One of the best ways for increasing skin cancer awareness in these ethnic groups is to begin educating the children at as young an age as possible, and of course parents should also make a point of physically examining their children on a regular basis.

Not only does skin cancer awareness minimize your chances of developing skin cancer, but it also makes it easier for you to be able to spend time outdoors without having to worry about the potential dangers concerned, simply because you'll be armed with the correct type of information in order to keep yourself safe.

Remember, no matter how old you may be, your loved ones don't want to lose you. So enjoy the sun but don't put yourself in harm's way and remain the skin cancer awareness leader of the pack.