Skin Cancer Facts Everyone Should Know About

Familiarizing yourself with skin cancer facts is something which everyone can benefit from, considering that basal cell carcinoma, squamous cell carcinoma, and melanoma, the three types of skin cancer, are becoming increasingly prevalent.

Fortunately however, practically all types of skin cancer can be prevented simply by avoiding excessive sun exposure or any other type of ultraviolet radiation.

Furthermore, most forms of skin cancer can be treated successfully providing they are detected early enough. 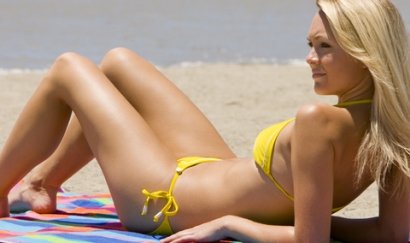 The truth of the matter is that you are more likely to discover cancerous cells on those parts of your body which are exposed to the sun the most.

For example, your face, neck, lips, back, chest, and hands tend to be the most vulnerable areas of the body. However, this is not to say that malignant cells cannot develop on other areas of the body even if those areas are rarely exposed to sunlight.

In fact, skin cancer can manifest itself under your toe nails for example, or even on the palms of your hands or genitals. This is exactly why everyone should make a point of familiarizing themselves with the various skin cancer facts.

Another common misconception is that skin cancer only tends to strike those who have a fair complexion. To the contrary, many dark skinned people also end up suffering from melanoma, although it does appear as if the disease usually develops in areas of their body which receive very little exposure to sunlight.

Another interesting fact about skin cancer is that there appears to be no consistent timeline, in that a cancerous lesion can take years to develop, but it can also develop very rapidly depending on the type of cancer.

Visual detection can usually help in spotting the first signs of skin cancer. For example, basal cell carcinoma usually appears as a waxy sort of bump on the face, neck, or ears, although it can sometimes manifest itself as a flat scar-like lesion on the back or chest.

Squamous cell carcinoma on the other hand will usually first appear as a red nodule which is firm to the touch. Alternatively, sufferers may notice a scaly lesion appear on their face, neck, ears, lips, arms, or hands.

The deadliest form of skin cancer which is known as malignant melanoma can appear anywhere on the body, although in most cases, the disease tends to be more prevalent on the trunk, head, neck, arms, and hands in cases where men are concerned.

Women on the other and often have the disease on their legs. Generally speaking, melanoma usually appears as a relatively large brown patch with slightly darker speckles.

It can however also appear as a mole which either begins bleeding, or changes shape and color. Dark lesions on the soles of the feet can also be an indication of melanoma, although they can also appear on the mucus linings which are present in the mouth, nose, anus, and vagina.

Of course, as we grow older we tend to observe many changes concerning our skin, and this is usually perfectly normal but it's always advisable to go and see a doctor if you notice any unusual changes.

Remember, being familiar with skin cancer facts can make the world of difference just as what early detection can. The best thing of all is that you can avoid the condition altogether simply by taking advantage of adequate UV protection when you're out in the sun.